Showing posts from May, 2016
Show all

May 29, 2016
With so many 18th century events coming up in June, I had the urge to make several new things for the Summer. Handmade neckerchief out of pure cotton fabric Handmade/Machine sewn Cotton Batiste apron  1790's -1812 Open Robe gown out of the Waverley curtain fabric  1770's Jacket with a swallow-tail peplum, out of Waverley curtain fabric (with a matching stomacher) Green stomacher out of scrap fabric I bought in Historic Ellicott City back in January 2 drawstring bags (to store knitting and sewing demos during reenactments) Yellow Petticoat with flounce out of pure cotton fabric  Rosette to decorate my caps (Should be making a tutorial soon) When I can, I'll post pictures of each item including the details of how I made them. But for now, gotta get back to planning out what to put on the exhibit tables for the market fair in two weeks at the Benjamin Banneker Museum!
Post a Comment
Read more 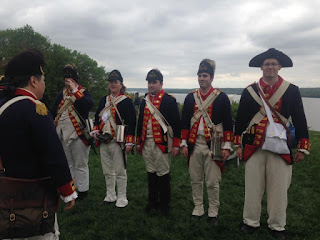 This year's reenactment went off without a hitch. The only setback we had was the weather. He were are in the middle of Spring, and the majority of us were wearing thermals underneath our costumes. On top of that, it rained on Sunday to the point where the event was at risk of being cancelled. For that reason, among other reasons, I decided not to camp out this time.  But while the weather was fair on Saturday, my friend Stephanie and I went and helped out with the distaff and did sewing demonstrations. I saw plenty of friends I hadn't seen in months, made new ones, ventured over to "enemy territory" for a while, and got to tour Mount Vernon's main house.  I hope that next year there will be clear skies and will be warmer than 60 degrees. I also plan to have new furniture such as chairs and a wooden folding table, so working on the sewing demos will be a bit easier, and maybe (hopefully if his work/military schedule isn't tied up) bring my husban
Post a Comment
Read more
More posts