Showing posts from June, 2015
Show all

Saturday's Visit To The L'Hermione 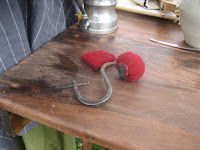 Yesterday, I had the pleasure of working with Ship's Company (an 1812 Naval Reenactment group in Maryland) for the arrival of the L'Hermione in Baltimore, MD. We were portraying civilians from sailors, cooks, seamstresses, and were to engage with visitors to demonstrate and talk about life in 18th century Baltimore as well as talk about the three ships that were in harbor: The  Pride of Baltimore II, The Constellation, and of course the L'Hermione.  I think this was called a "Long Arm", but it was used for easier sewing.                The Constellation  The Pride of Baltimore II The L'Hermione At noon, we were given the opportunity to go and tour the ship. The line to go aboard the ship snaked all the way from the starboard bow to the Trade Center, so it was initially a long wait; well for other visitors. Since we were in garb and were part of the program, we all got to cut in line. Surprisingly though, the other visitors were oka
Post a Comment
Read more 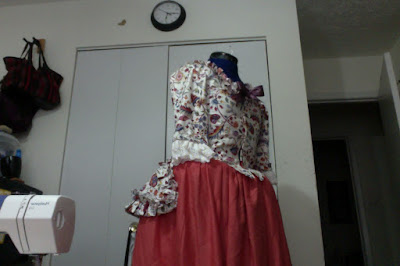 This is a really short post, but I wanted to show you the progress of the jacket that I had on display at the Colonial Fair this past weekend. Originally, it was a Robe L'anglaise but because it really needed an upgrade, I decided to cut the skirt of the robe into a jacket, then I took off the original trim and used the remaining fabric to make box pleats (love making them!) all around the yoke and the peplum, and topped the front with a bow and a decorative button. After I work on the closings in the front, I will be able to wear this gorgeous jacket on Saturday for the L'Hermione visit.
Post a Comment
Read more 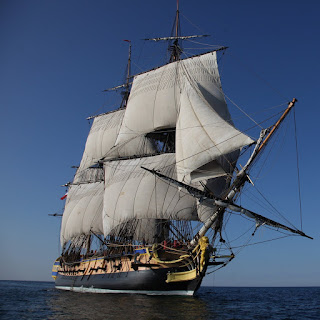 In my last post, I mentioned that I am prepping for an upcoming event. This weekend coming, I will be volunteering as one of the seamstresses for the L'Hermione at the Inner Harbor! She just sailed from Yorktown, Mount Vernon, and is currently docked in Annapolis. By Thursday night she should be in Baltimore. To view her itinerary click here For those who don't know, the Hermione is a the French frigate ship that Lafayette to the US in 1780 during the tail end of the American Revolution. While she is not the original ship, she is a beautiful recreation, and an honor to work for. When I was asked to volunteer by the Maryland Ships Company to do a sewing demo, I immediately accepted and am now making plans on what to sew next. I could  work on my first jacket from J.P. Ryan pattern I was attempting to make a few weeks ago. While I do have the mock up ready, I now have to cut out the pattern for the fashion fabric. At first I was thinking of using cotton fabric, but the
Post a Comment
Read more 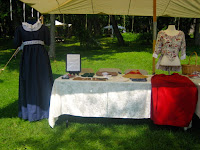 Still recovering from the weekend event at the Benjamin Banneker Museum. It was still pretty hot outside (but not as hot and humid as it was on Saturday). Anyway, on Sunday I had the whole tent to myself, and with my Aunt and Grandparent's help, I got to turn the second table into my workstation.  Despite the heat, a lot of people stopped by my table and were enamored with all of the items, and asked questions pertaining to how long I've been sewing, if I was a historical Interpreter or vendor, if I taught sewing classes, and if I took commissions but there were a few who were interested in historical  fashion from the 18th century and early 19th century, as well as learning about the trade and what type of tools were used to sew (since the sewing machine wasn't invented until the late 19th century).                                 My Historical Sewing Monthly project up on display     Throughout the entire day there was music, singing, demonst
Post a Comment
Read more 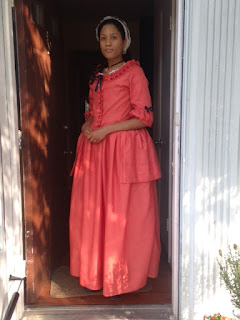 The Colonial Market Faire is finally here at the Benjamin Banneker Museum!  What did I do to get ready???? Again for the 4th night, I pulled yet another all-nighter to get everything ready for today's event. At the very last minute, I decided to augment one of my older gowns and turn it into a small jacket. I probably didn't finish sewing everything until 2:00am; it got to the point where I was just too tired to continue on with the trim, so I decided to just work on it while sitting at my display table.  Anyway, I finally got to wear my new Caraco jacket that I finished on Thursday, and surprisingly it   was very comfortable. It didn't feel heavy like my other Robe L'anglaise's when I bustle them (especially in this hot weather).   Speaking of weather!  Sometime in the middle of the day, it became a whopping 85 degrees and the humidity wasn't helping at all. At first it didn't bother me too much considering I was wearing cotton fabric a
Post a Comment
Read more
More posts